Going through various piles in my office as I've inhabited it non-stop for over a year has meant finding *all* of the half-used notebooks and notepads that are around. And I do mean all of them. I knew it was pretty bad, there are lovely journals around here that have a dozen entries from whenever I optimistically restart journaling again. There's even a pretty spiral bound notebook dedicated to my research ideas, so I can just sit down and scrawl it out, get it out of my head, and then never manage to get back to that research. 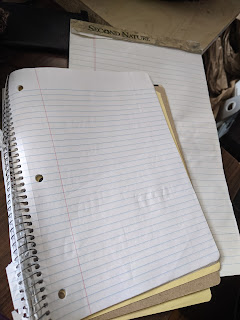 These are not the journals-- these are legal pads of yellow paper, and spiral notebooks that are somewhere between 2-17 years old. They're half used, with pages and pages ripped out and long since trashed or recycled. Where notes do occasionally remain, they're vague and don't tell me much. "Email Scott and Angela" one page said --- although I know neither a Scott or an Angela and cannot remember any such combination in the past decade. 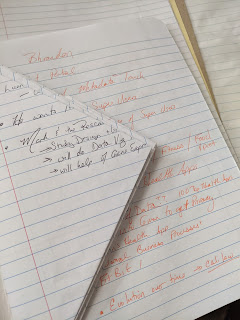 But I do prefer writing hand scrawled notes; it's better for me in many respects than online notes--easier to highlight and mark questions. Also I can usually pull out the three things after and then dump the rest which was mostly stream of conscious as I worked through an average 6 meeting day. So I've been using up all the half-used, not as pretty but still full of perfectly decent paper notebooks over the pandemic. I still have a half dozen or so to go but, knowing how many meetings I have in an average week, that'll probably be used up before we head back for full time in the fall.
What's the next step after that? Rocketbooks. These are a reusable notebook that is sort of like having my own whiteboards as notepads -- only you use water to clean them not alcohol. They work with the frixion pens, which are always handily available at Target.  They do have to be wiped down and remind me of being in high school and cleaning the overhead transparencies for my calculus teacher but also are very reusable. There's a microwaveable version which initially I was suspicious of but now I do sort of want to try. 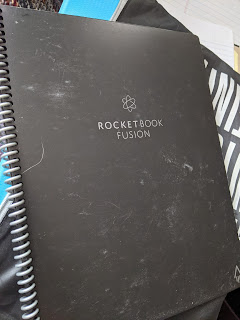 I've been using these for a couple of years as different versions have come out and I have five: a small purse sized notepad, the original 5x8, the 8x11, and two legal sized flip notepads with a dedicated magnetic board. I was stunned how fast I was going through the flip notepads recently. I spent a solid two hours transcribing and pulling notes from them and cleaning them up this past weekend. I absolutely use the lined side of the paper more than the dots.  It's a smidge fussy but so much easier than hauling around paper.  (not that I'll ever 100% give up paper, different tactile experience) 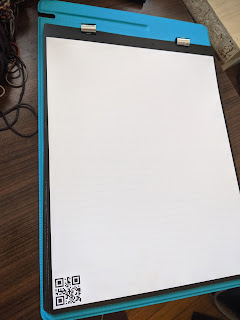 You can see the QR code, the goal is to scan your notes then into whichever app you have set up on your phone. I'm not using them for that right now? I have before but mostly that's not how I want them to be used.
Are you a half-notebook semi-abandoner like me? How do you prompt yourself to use them up?
on May 02, 2021 No comments: