The first book that I remember actively reading on a Kindle device was Anathem by Neal Stephenson. I was traveling to DC and borrowed a circulating early Kindle reader from work because it was going to be much lighter than the three inch hardcover that I was wading through at home. That was apparently February 2011 -- per my Kindle library and it was the second e-book I'd purchased from Amazon.  (The first was a short story by Eloisa James.)

Now, ten years later, I have 219 books in my Kindle holdings. Amazon isn't known for being particularly good with allowing users to manage their libraries -- so after navigating a messy import from Amazon to Goodreads and then Goodreads to a spreadsheet and then doing cross validation of the spreadsheet back with my Amazon holdings and then cleaning up my Goodreads; I now have a spreadsheet that includes even the book I bought on Tuesday.

Caveat: I use Goodreads to track things I've read. It's inexact but gives me a general idea of how many (mostly fiction) books I've made it through the year. I have a lifetime membership to LibraryThing and someday would love to get my print library updated and my e-library also aggregated there; and or on a catalog my sibling put together. Basically I'd like to have everything properly sorted and cataloged, but that's not a project I'm working on right now. 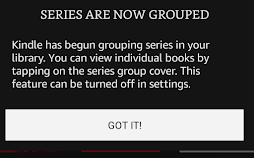 (I logged into the Kindle app on my phone tonight to learn they are grouping series now! That's nice)
'
Right now, I'm facing the pixel mountain of 174 Kindle books which are Unread. And at the rate I read books this year that'd be a half-dozen years worth of fiction reading.  I used to read 2-3 new books a week for fun and here we are in nearly 2021 and I'm wallowing in rereads (which I do not count). I also read and look at screens so much during the day that by the end I don't want to focus on a printed or e-page and I go for an audiobook instead so I can knit, or fold laundry, or just move around.

But this is a little private library of "Things I Thought I'd Like to Read' and even working back through confirming titles and adding series information, I kept thinking "ooh, that sounds good, maybe I should start that." So Past Me was Shopping Thoughtfully for Present and Future Me. It's mostly historical romances and murder mysteries, with a few giant histories added in for good measure.

So - using up -- or at least moving things to the Read pile. I plugged my tablet in --it's been sitting by the bed being wistful and hoping that someday I'll charge it properly. We'll see how that goes. It did at least turn on after a few minutes so I'm hopeful. Once it's had a moment and been restarted three times,  I'm going to download a few books and see about reading rather than another endless round of Farm Heroes Saga.

I'm curious -- how do you consume ebooks? On your phone? On a separate device? My partner has moved over to a Kobo and *loves* it.... so I'm looking at the Paperwhites again if the tablet doesn't work out.