When I kicked all of this off it was with Lotion -- the backlog of which I was trying to make a dent in. I'm pleased to say that there is less lotion than there was.  I did have a brief fall down with a pumpkin lotion last year and a shipping issue meant there's now a lot of pumpkin lotion but overall the count is going in the downward direction. Progress! Go me! 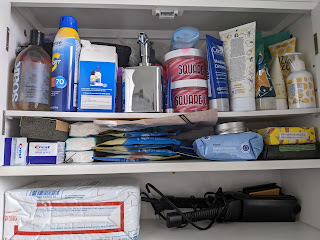 Now then -- the rest of the bath products. As you can see in addition to some lotion we have body scrubs, soap, face wipes, a ton of purse Kleenex (and yet there's never a package in my purse), etc. I checked the expiration date on the sunscreen -- still good to get me through spring or that one 70 degree day in February where I'll need to take a long walk.

And then there's that USPS package. The one down there on the shelf next to my flat iron. See, my friend E decided last spring that she was going to use up all of her soap making supplies. She had a fair amount of supplies and that became a thousand bars of soap. (Yes that's the correct number of zeros, I went back and checked.) And then she had a pre-order for her FB family and friends.

To say that we all went slightly bonkers is an understatement.  It was like the trading floor at the NYSE for a solid couple hours there with people Flinging Themselves into the Queue for Pretty and Delicious Smelling Soaps.  I was deeply amongst the fray, searching through the descriptions, choosing what I thought would be the finest, trying to keep an eye on what was probably already sold out. Once all bought and boxed, E sent it along...and it was one of the first things I moved into my bathroom. Where's it's sat unopened. 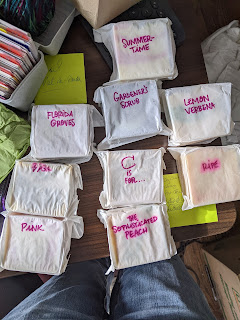 See, first I was justifying that the soap was still curing. Which was true -- E recommended we give it an additional month or so. The soap was fine but a bit longer wouldn't hurt. Also it's not like I don't have other soap.

But it's a new year and I am ready for a new bar of soap (or close enough -- the other soap end may just be banished to another shelf of the shower). 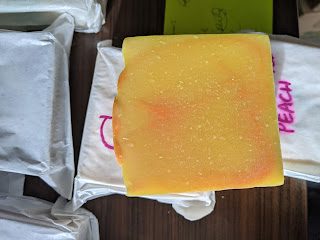 I've unwrapped the Ripe flavor -- it's pretty and ready for my shower tonight. I'll get to think of the frantic sale and the silliness of all of us racing to buy soap and remembering watching E make all these loaves of soap and their pretty names and colors and scents.
Your challenge-- go hunt through the bathroom and find the "fancy soap" you set aside for visitors or the mythical "later." Let's get those out. Later is now.  You deserve the good soap.