Bins are appealing. Tidy boxes where things will live and will magically be accessible. Call it never having gotten past the Berenstain Bears story where Mama gets completely tired of the kids having a messy room and threatens to throw all their toys away. They figure out that it's just some storage and labels that was needed.
Suddenly I have suspicions about all the home decorators who are close to my age.... Just how many of us are really trying to achieve that bedroom with the puzzles stacked neatly in the closet.
Right, this is a book review.
Yes, I do want to get back to UUY in 2023, same as I did last winter and as it spawned the winter before. I moved my office a few weeks ago -- just one floor in my work building and yet I pulled two full garbage bags out of that single room. And there's more to get rid of -- at least a full box of books and other things. So seeing this book rather relentlessly advertised to me, I grabbed an e-copy. 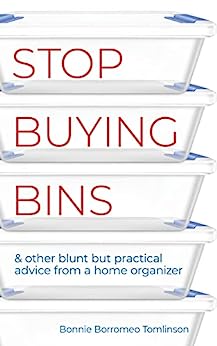 Stop Buying Bins by Bonnie Borromeo Tomlinson
The author plunges in almost belligerently, working through various client scenarios and episodes to give people ideas of where they might be struggling and ways what she helped them to work through the situation they might find themselves in.
I felt it had an odd focus on her rather than her clients, more "confessions of an organizer" rather than actual meaningful suggestions for her audience. And while I understood her intent was blunt and a more tough love approach than other organizers might provide, it came off as obnoxious.
One thing that particularly troubled me was her tone when describing men versus women.  Nearly all of the episodes had a woman as the main client, which wasn't particularly surprising. I assume that's also likely the audience for her book. But by replicating decluttering/too much stuff as a women's problem rather than a problem that adults have or scenarios many of us might encounter -- it reduced the helpfulness. Only one chapter is specifically focused on a man as the client and it was irritatingly forgiving "oh he was like other bachelors" and therefore excused for focusing all his time on his job and owning and carrying for multiple luxury cars. By that point in the book, I did not trust that if it had a been a female professional that the author would have presented her equally as positive.  The only other man that is really present in the book is a client's husband who Entirely Buys In after his military awards are on display -- but then leaves the author and his wife to *do* all the labor.
Likely the most helpful advice she gave was focused on seeing what you have already purchased as enough-- you now have an abundance and it can be a blessing. That was a particular framework shift that I've seen in other organizer books but was notable here.  She also talked about not buying things you don't care about, which is a useful thing to consider but I think another book I'm reading, Financial Feminist, comes at it better.
Can't say I recommend it.
on December 29, 2022